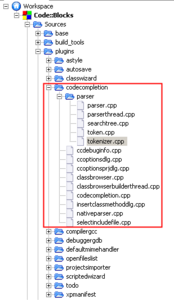 Note, you should use "update.bat" to copy the new generated dll to the destination and strip the debug information. Here is the modified bat file which only update CodeCompletion.DLL.

Open the source file and convert the file buff to Unicode mode.(since we are all using Unicode build of code::blocks, and ANSI mode is outdated).

The class contains a Pointer to the current position of the character, you can Get or Peek the current character.

For example, if the Tokenizer was parsing the example code above.