From CodeBlocks
Revision as of 21:31, 14 December 2007 by Wobien (Talk | contribs) (→‎Prerequisites: You need to all the source files od C::B and compile them, so better link to pages about how to do that)
(diff) ← Older revision | Latest revision (diff) | Newer revision → (diff)
Jump to: navigation, search
This article contains outdated information.

Select the File->New->Project option from the main menu bar and choose the Code::Blocks Plugin Wizard. You will see a dialog box with some information but you can skip that after reading it. Now you will see the following dialog box: 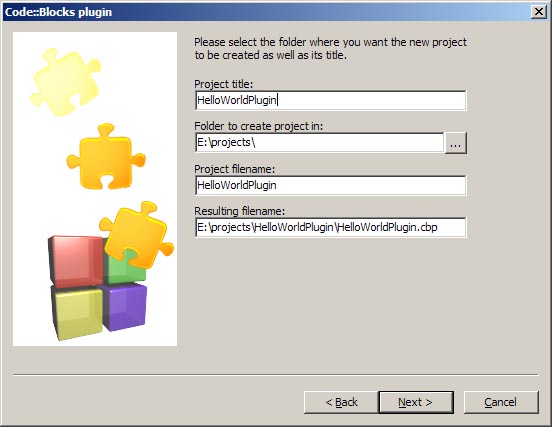 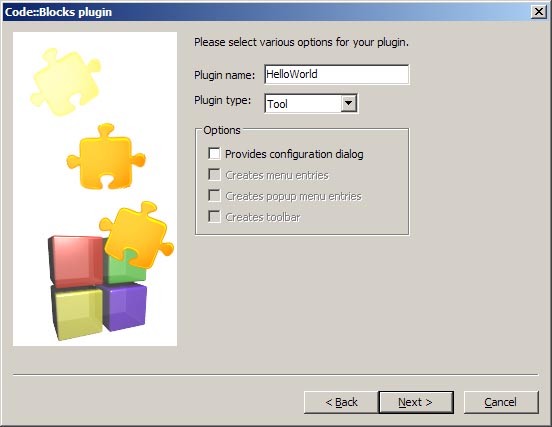 Letting the project know where to find the SDK

If you click on the Linker Options tab at the top level in the Build Options dialog, you will see that the plugin is being linked to the Code::Blocks core library (codeblocks) and the wxWidgets library (wxmsw242 under windows NOTE: The plugin generator uses 2.4.2, if you're using a different version of wxWidgets then change this).

The plugin wizard should have generated us helloworldplugin.h and helloworldplugin.cpp. The header file contains the class definition; what we're interested in, however, is the definition of the class methods in helloworldplugin.cpp. The plugin wizard has generated a constructor, a destructor and three methods. OnAttatch and OnRelease are methods called to inform the plugin when it is attached (the user has selected it and Code::Blocks has loaded it) or released (Code::Blocks no longer has a use for it or is shutting down). Since our plugin does not need to perform any actions on loading or shutting down, we can leave these as they are.

The first two lines check to see if the plugin has been attatched (in other words selected by the user in the Plugins->Manage plugins menu), and thus whether it should perform any action at all. Currently the return value of Execute is not used anywhere, but all the default plugins use -1 for failure and 0 for success.

(New) The time is right and we should compile the project. The next step is to install the plugin. Go to the Plugins->Manage plugins option. Hit the Install new button. The manager ask you where the plugin lies. Go to that folder and select the *.cbplugin file. Code::Blocks imports your plugin automatically. If this procedure was successful you can see your plugin in the Installed plugins list. To execute your plugin go to the Plugins menu and choose your plugin. That's all.