Working as a developer on a project which relies on 3rd party libraries involves a lot of unnecessary repetitive tasks, such as setting up build variables according to the local filesystem layout. In the case of project files, care must be taken to not accidentially commit a locally modified copy.

Global compiler variables in Code::Blocks are discriminated from per-project variables by a leading hash sign. Global compiler variables are structured; every variable consists of a name and an optional member. Names are freely definable, while the member structure is built into the IDE. Although you can choose anything for a variable name in principle, it is advisable to pick a known identifier for common packages. This way, the amount of information that the user needs to provide is minimised. The Code::Blocks team provides a list of recommended variables for known packages.

The members dir and base resolve to the same value as the variable name uses without a member (alias). The members include and lib are by default aliases for base/include and base/lib, respectively. However, a user can redefine them if another setup is desired. It is recommended to always use $(#variable.include) instead of $(#variable)/include, as this offers additional flexibility at otherwise exactly identical functionality. The members cflags and lflags are empty by default and can be used to provide the ability to feed the same consistent set of compiler/linker flags to all builds on one machine.

All you need to do to start using global compiler variables is to put them in your project! 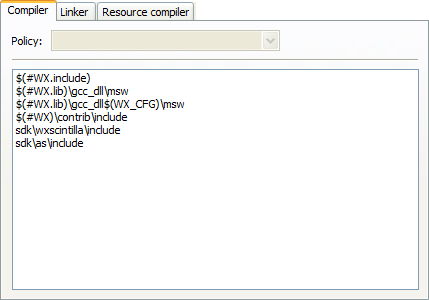