A grid can be a useful way to display data, especially matrices of numbers. If the matrices are large, the full grid will be too big for the screen, so we will want to display it in modest proportions but allow the user to resize it or scroll about in it with the mouse. Like so many things related to computing, creating such a grid with wxSmith is easy once you know how, but figuring out how can consume many hours. What follows is the distilled result of such a trial-and-error process. At the end, we will have a scrollable grid with names on the columns and rows and values in a 3x3 matrix.

Probably the most valuable use of the code that wxSmith writes for us is as an example of how to use wxGrid. When Smart and Hock get around to describing it on page 346, they seem to have run out of energy for making up clear, complete examples. wxSmith can come to their rescue with nice examples. The wxSmith code itself, however, is not likely to go directly into your final program. For example, you may well want the size of the grid to be determined by some variable, say MySize, in your program. The code wxSmith writes has the size of the grid as a fixed constant, say 15, but you can easily see from the wxSmith example how to make the grid's size depend on MySize in your code.

Create a new wxWidgets application. Call it DiaGrid and make it frame-based. We don't want the grid showing all the time, only when we call it up. So we need to add a Frame or Dialog as we did back in Tutorial 4. For ease in avoiding memory leaks, we will use a Dialog, hence the name DiaGrid.

Click on the wxSmith tab of the CodeBlocks main menu and click “Add wxDialog”. Call it Barnum. (Why Barnum? I first used names with “grid” and “dialog” but wxSmith also uses “dialog” a lot and “grid” has a specific meaning. The names became very confusing; something unique was needed. P.T. Barnum was a famous American showman; since we are trying to show a grid that shows data, “Barnum” seemed as good choice as any.) Drop a box sizer into the frame. Into the sizer put a panel and check the panel's Expand property. Onto the panel drop another box sizer. Into it put a wxGrid from the “Advanced” tab of wxSmith. The lower part of the Management pane should now look as shown on the right.

If you click the “Show preview” button over on the right (just under the big red X) a grid appears and you can scroll around in it. It is pretty small, but if you try to stretch it with the mouse, you will find that it won't stretch. We have forgotten something. Click on that wxDialog just under Barnum in the Resources pane. Click on the + in the square next to “Style” in is properties box. Scroll down until you get to wxRESIZE-BORDER and check it. Do the same with the wxDialog above Barnum. Now the grid should stretch.

The choice of pt as the name of created instance is arbitrary; the letters are just old Barnum's initials. Everything else has to be just as it is. Because we have used “ShowModal”, the program does not get to the “delete” line until the user has closed the dialog with the grid. But because we then promptly “delete” the instance of Barnum – that is to say, we release the space in memory which the “new” command grabbed for it – we should not experience any memory leaks. 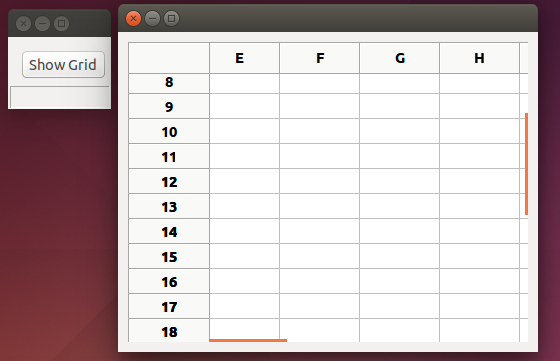 We see immediately that wxSmith starts the row and column numbering from 0. Note how it set the values of the three elements in the 0th row. Let's now add two more rows to our array with these lines below the //*):

Now save Barnum.cpp and click the Compile-and-run button. When you show the grid, you should see something like this. 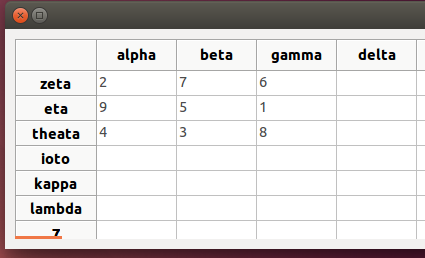 The numbers of course form the magic square; all rows, columns and diagonals have the same sum. Anyone adventuring into wxGrid land is going to need all the magic he can get. But studying the Barnum.cpp code should help.