A grid can be a useful way to display data, especially matrices of numbers. If the matrices are large, the full grid will be too big for the screen, so we will want to display it in modest proportions but allow the user to resize it or scroll about in it with the mouse. Like so many things related to computing, creating such a grid with wxSmith is easy once you know how, but figuring out how can consume many hours. What follows is the distilled result of such a trial-and-error process. At the end, we will have a scrollable grid with names on the columns and rows and numbers in some elements of a 40x40 matrix.

The choice of pt as the name of the created instance is arbitrary; the letters are just old Barnum's initials. Everything else has to be just as it is. Because we have used “ShowModal”, the program does not get to the “delete” line until the user has closed the dialog containing the grid. But because we then promptly “delete” the instance of Barnum – that is to say, we release the space in memory which the “new” command grabbed for it – we should not experience any memory leaks.

Now we can put some values in the cells. The next row down in the properties box is “Cell Data”. Again click the little square at the right end of the line. Enter 2, 7, and 6 on successive lines. These will go into the first row. Since we have set the number of columns to 40, we would have to add 37 more lines to get to the second row. We will get there by a different route.

The size of the grid may well not be known at compile time but depend on the matrix to be displayed. Somehow that variable size will be communicated to Barnum, perhaps by parameters in the call, perhaps by global variables, perhaps by a read from a file. To keep matters simple, I have represented that process by just defining nrows and ncols as ints in the code, but as far as the CreateGrid() function knows they came from somewhere else. So our Part2 begins:

But it does not illustrate the use of the SetColFormatFloat function. That command in the previous line applied to column 5 while this line puts a string – not a numeric value – into column 6, not 5. We can easily correct the column number: grid->SetCellValue(0, 5,_("3.1415")); 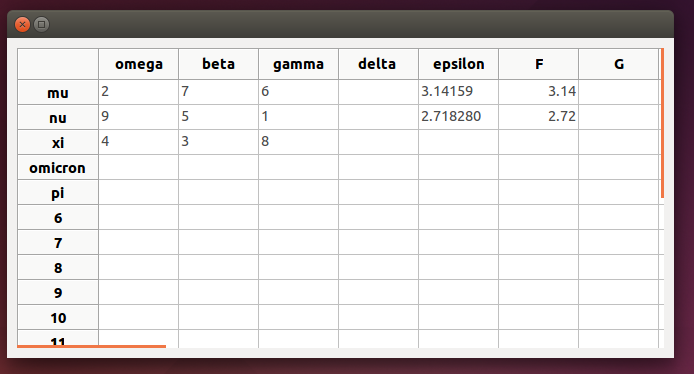 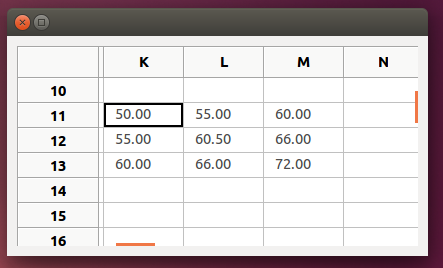 As for the square of integers in the upper left corner of the grid, it is “magic”; all rows, columns and diagonals have the same sum. Anyone venturing into wxGrid land is going to need all the magic he can get. But studying Barnum.cpp or other wxSmith code should be helpful. If it is hard to imagine how Smart and Hock could have thought that their very incomplete example was sufficient it is even more mind-boggling that BYO, the creator of wxSmith, was able to figure out what had to be done and to make it all so easily available.