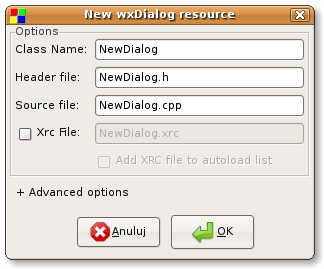 A new dialog is automatically opened in the editor. In the top bar of the frame of the editor, note that there are two .wxs files available to the editor, Tutorial_4Frame.wks and the newly created FirstDialog1.wxs. Both are completely blank. Into FirstDialog.wxs let's add some simple content so that it looks like this in the editor:

It is a good review exercise to figure out from this figure what has been done. It is very similar to what we did at the beginning of the previous tutorial. Before reading further, try your hand at making it. (To tell the truth, it doesn't matter much what you put in because all we are going to do with it is show it, But if you need a review, here is what I did: 1. Put a wxBoxSizer on the editor. 2. Put a wxPanel in the sizer (and remembered to turn on its Enlarge property). 3. Put on the panel a wxStaticBoxSizer, changed its orientation to Vertical, and set its label to “This is the first dialog.” 4. Into the StaticBoxSizer put first a wxTextCtrl and then a wxStaticText item.) At this point, the Show Preview button on the extreme right of the editor will show us what we have, while running the program will show nothing, because the application has no programming to show our dialog.