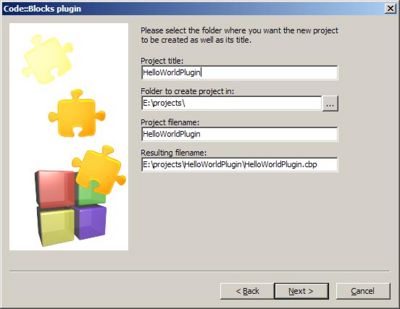 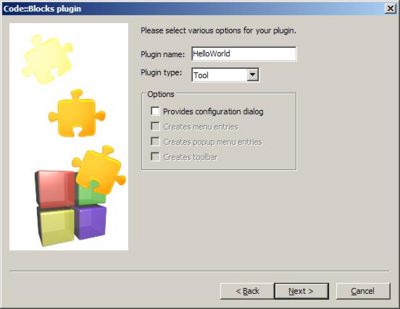 If you click on the Linker Options tab at the top level in the Build Options dialog, you will see that the plugin is being linked to the Code::Blocks core library (codeblocks) and the wxWidgets library (wxmsw28u under windows NOTE: With 12.11 lhe plugin generator uses 2.8.12, if you're using a different version of wxWidgets then change this).

The Compiler Options tab shows that several symbols have been defined when the plugin is compiled: HAVE_W32API_H, WXUSINGDLL and BUILDING_PLUGIN in this case (using windows). The first two are indicators to wxWidgets of the compiler and DLL options to use, and the last is an indicator to the Code::Blocks SDK headers that they are being used to build a plugin (which affects whether or not symbols are exported or imported for the DLL - see cbPlugin.h for example).

The plugin wizard should have generated us helloworldplugin.h and helloworldplugin.cpp. The header file contains the class definition; what we're interested in, however, is the definition of the class methods in helloworldplugin.cpp. The plugin wizard has generated a constructor, a destructor and three methods. OnAttatch and OnRelease are methods called to inform the plugin when it is attached (the user has selected it and Code::Blocks has loaded it) or released (Code::Blocks no longer has a use for it or is shutting down). Since our plugin does not need to perform any actions on loading or shutting down, we can leave these as they are. There are comments generated by plugin wizard to explain the functionality. For example, in the header file, code is like below to explain Execute() in doxygen style:

(New) The time is right and we should compile the project.