Before starting to install MinGW under Windows Vista there are some things to remember:

For this HOWTO I used some Conventions:

Just one thing left: I've done this under Vista Business and a friend of mine reported it working with Home Premium. I hope it works on the other versions, too.

First of all you need the MinGW Compiler to be installed. I used the installer but all methods desciribed under MinGW installation should work fine. You may althoug want to upgrade your Version of MinGW to 4.* though. When you finished installing the basic MinGW we'll start making it work with Windows Vista. (Note: There is no need to set any %PATH% - variables when you use only Codeblocks, this is the way I'll focuse on)

If you haven't already done it it is time to install and start Code::Blocks. It's a good idea to create a sample "console application" so you have a basic "Hello world" to test your progress. As I first tried to run "Compile" without any Modifications I got the following Error:

This doesn't tell us very much. The problem here actually is, that MinGW is unable to find its helper executeables, in this case cc1plus.exe. To fix this go to your "Settings" -> "Compiler and Debugger" -> "Toolchain executeables" -> "Additional paths" and add there the Directory "C:\MinGW\libexec\gcc\mingw32\MinGW-Version where MinGW-Version is the Version of MinGW you are using. If you use a unmodified Version this is most probably 3.4.2, as I have the newer 4.2.0 I use this. 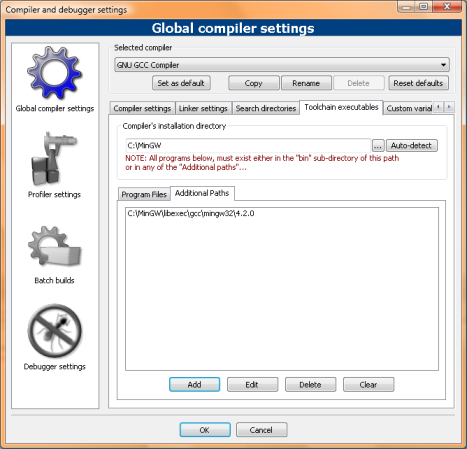 Let's try to compile again and see the progress.

So MinGW is not able to find <iostream>. Let's tell him where to search:

Still in the Compiler and Debugger dialogue go to "Search directories" -> "Compiler" and add:

There are not necessarily all of them needed, but these are the directories MinGW searches in normally.

Try again to compile. The compiler should now execute normally, but there is a Linker error left:

So we apparently need to tell MinGW where to search for it's librarys. This is again done by adding some "Search directories", but now we use the section "Linker"

Try to compile, it should work. 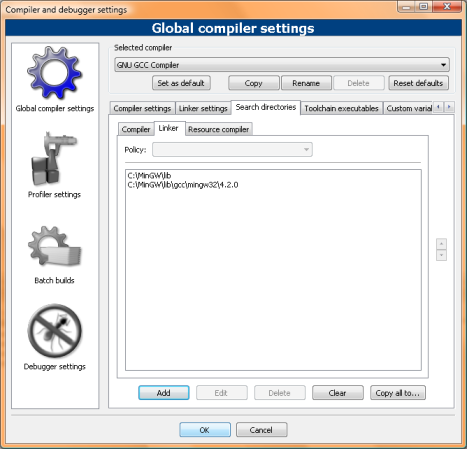 If this does not work out for you there is some advice to figure it out on your own:

I have been using this fix that was made available in the Mingw-Users list, by a kind a person. It works fine without having to do any abnormal modifications to your CodeBlocks setups.

If it helps anyone else, I took the three patched drivers that Danny posted (gcc, g++, collect2) and copied them to their various aliases (e.g. c++, mingw-g++, etc) and put them in the appropriate directory structure, and made it a tarball:

If you unpack this in your MinGW root folder (e.g. /mingw) just like all the other gcc-foo tarballs it should install the files in all the right places. I tested this on a Vista copy running VMware and it worked fine for compiling and linking C and C++.