Using precompiled headers (or PCH) speeds up the compilation of large projects (like Code::Blocks itself) by large amounts. This works by creating a header file which #includes all the rarely-changing header files for your project. Then the compiler is instructed to pre-compile this header file. This creates a new file which is now in a binary format that only the compiler understands. But, since it doesn't have to re-parse your header files for every source file that includes them, the process will now be considerably faster. 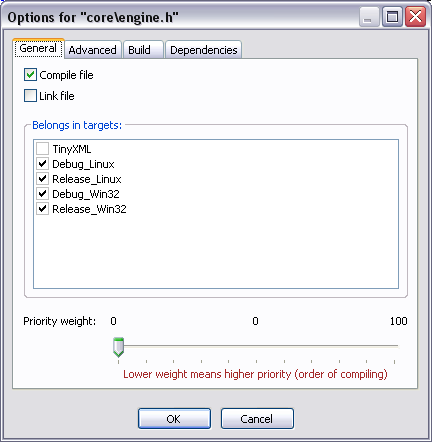 Also, set the priority weight to zero, to force it to be compiled before all other files (default priority is 50 - the lower this number, the higher the priority). Exit this dialog by clicking "OK".

The first line will emit a warning when building your project, if the PCH is _not_ used. It's nice to know this.

The second line, does all the magic: it's like adding #include "pch.h" at the top of each of your source files, except you don't have to edit them.

This doesn't work in all situations, but it's the quick way to add PCH in your project. Specifically, it won't work if the PCH is in the same directory as the project file. If that's the case, go to "Project->Properties" and set the PCH mode to "Generate PCH in a directory alongside the original file" (first option).