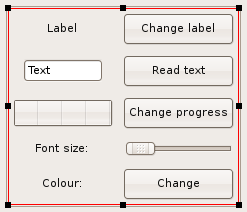 (Use Panel1.GetSizer()->SetSizeHints(this);for the second line in the above statement, where Panel1 is the name of the base panel in your frame.The original code, rather than resize to the new required size, just resizes to the original, default size.Ensnarer 03.08.2015)

At the end, we set the new colour by using the SetForegroundColour function. Refresh is needed to change colour after setting it.